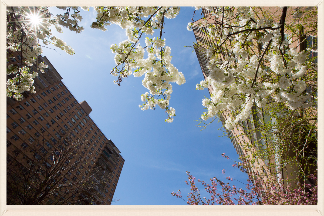 When Trump Village opened its doors in 1964, it transformed a neighborhood of gentle declining three and four story, brick and wooden structures, housing people of first and second generation Americans from southeastern Europe and Russia, into a vibrant community of 23 story, brand new state of the art brick towers. These were composed of 1,672 modern one, two and three bedroom co-op apartments, many with terraces and views of the ocean and the skyline of lower Manhattan. After waiting for over seven years ( and having plunked down sizeable amounts of hard earned money), middle income residents from Beach Haven, Brighton Beach, Coney Island and all over Brooklyn and farther field, flocked to fill the apartments of the new community.

Gone were the old respectable, but decaying houses. Gone were Kelly's Stables between West 1st Street and West 2nd Street. The little "Mom and Pop" stores that sprinkled the neighborhood as well as the Church and the tiny Synagogue on West 3rd Street disappeared as well. All that remained of the old neighborhood were the art deco Shelburne Apartments, two or three old, but well built small apartment houses, and the Church of the  Guardian Angel on Ocean Parkway.

But for the new residents — pioneers all — it was not all a bowl of roses. Neptune Avenue, which was being reconfigured and reconstructed was still just a sea of mud. Other developments were rising simultaneously with construction and demolition debris in evidence in the surrounding areas. Parking was at a premium. But as the months went by, a new community arose.

Two shopping centers within a block of Trump Village emerged. Spanking new supermarkets, banks, pharmacies, cleaning stores, barber shops, beauty salons, restaurants, a post office and convenience stores arose within a block or two of the new development. New bus routes were established by the city, supplementing the nearby Q and F trains already in existence. Also near by, within a block's walk, were a highly touted elementary school, a respected intermediate school and a signature high school.

In addition to our own playgrounds were two public playgrounds; one in Asser Levy Park, and the other, the Century Playground between West 1st and West 2nd Street. Asser Levy Park also soon became a summer concert venue for neighborhood residents and Brooklynites from all over the borough.

Brighton Beach Avenue was extended by the city from Ocean Parkway to West 5th Street bringing Trump Village into the parallel orbit of the Brighton Beach community with its vast shopping district and cultural activities, which include a branch of the Brooklyn Public Library, the Shorefront YMHA, and a vast array of Russian nightclubs and restaurants.

Soon new houses of worship opened their doors in the neighborhood. Luxury and more middle oncome housing followed in the footsteps of the renaissance led by Trump Village. First and second generation immigrants from the Soviet Union traded their older Brighton apartments for the spanking new modern development of Trump Village.

In 2007, another momentous transformation took place. Trump Village was originally established as a Mitchell- Lama middle income cooperative, self managed, but under the supervision of the State DHCR. In 2007, having paid off its mortgage in full, its residents, the cooperators, voted to leave the Mitchell — Lama program and become a private cooperative unfettered by the stultifying bureaucratic hand of the state. The real estate value of Trump Village immediately soared.

New younger families moved in to take advantage of the highly prized affordable apartments. The Co-op embarked upon a 21st century capital improvement program. A brand new state of the art playground was built to accomodate the growing population of young children. New beautiful lobby entrances replaced the original ones. New elevators replaced the old ones. The garbage dumpsters were relocated away from the buildings, modernized and landscaped.

A private, children's daycare center that catered to the needs of Trump Village's working parents was established in the Building, and a private medical center opened in Building 5, located on West 5th Street. For its older residents TOPS was created by Trump Village residents. The organization provides social activities, a guidance network, cultural activities, art and technology classes and a host of other creative activities. Many of them are conducted in both English and Russian to accomodate our residents.

From toddlers to teenagers, working people to professionals, younger people to retirees, Trump Village Estate has come of age, a vibrant, forward — looking, self managed cooperative community with a 21st century outlook and a future full of optimism and prospects of continued good living.

Our history in pictures